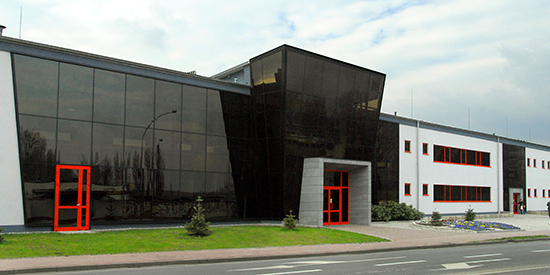 It all started in the ‘Actors’ Home’… back in 1992 two families: the Dziembors and Czerwińskis started their adventure with dumplings, which are being more and more often called pierogis. The production of dumplings started on the premises of the canteen and kitchen rented in the abovementioned Actors Home. Manufacture of the filling for dumplings was supervised by the owner, Jan Dziembor himself. The other owner, Adolf Czerwiński, with his wife Grażyna kept busy dealing with administrative work and finding new customers.

In 1996 dynamically growing sales of Jawo products made the owners find larger premises. They found a production plant, which was located at Bór 66L street in Częstochowa. And that was actually the time when the industrial production of dumplings started.

In 1999 the Jawo company entered the European market. At present products with a snail in the logo can be bought across Poland, and thanks to the Polish people living abroad the company has become recognized in Europe and America. Germany is Jawo’s biggest foreign partner, but the company exports its products to the UK, France, Spain, Ireland, Iceland, Greece, and Holland.

In 2003 the production plant in  Bór street was extended and the HACCP (Hazard Analysis and critical Control Point) system was implemented, soon to be followed by implantation of the ISO 22000: 2005 system, which has been certified and audited since 2009.

In 2006 near the company premises in  Bór street a new real estate property was purchased, where two years later the construction of a new plant started so as to enable the company to increase its production and distribution capacities.

In the first two months of 2011 the production moved to the new plant on the new premises in Równoległa 88/98 street shortly followed by the offices. In March the new plant was audited by the ISOQAR certification body. The operation of the ISO 22000 food safety management system was tested. The verification results of the quality system were positive, hence the Jawo company is entitled to mark their products as ISOQAR approved since our products are manufactured under special food quality monitoring.

September 2011 witnessed implementation of the BRC food safety standard. In order to confirm that Jawo manufactures safe food, a thorough inspection was carried out focusing on the quality, hygiene and safety of all the production stages from food products supplied to the plant to customer satisfaction. The BRC Global Standard introduced by the British Retail Consortium is required by a growing number of hyper- and supermarkets across Europe. This standard was developed in order to provide the highest possible quality of manufactured products.

On May 15, 2013 the Jawo company signed a cooperation agreement with Ajinmoto Frozen Foods, which belongs to Ajinmoto Group, with the head office in Tokyo, operating worldwide and specializing in food and chemical products. As a result of a growing popularity of the Japanese culture and especially Japanese food, which the recent years have witnessed, Ajinmoto Frozen Foods decided to start producing gyoza in Europe, and they decided to have it produced by Jawo. The company started to manufacture one kind of gyoza dumplings – with chicken and vegetable filling.

This website uses cookies to improve your experience while you navigate through the website. Out of these, the cookies that are categorized as necessary are stored on your browser as they are essential for the working of basic functionalities of the website. We also use third-party cookies that help us analyze and understand how you use this website. These cookies will be stored in your browser only with your consent. You also have the option to opt-out of these cookies. But opting out of some of these cookies may affect your browsing experience.
SAVE & ACCEPT